Wilhelm Albert Włodzimierz Apolinary Kostrowicki, known as Guillaume Apollinaire (French pronunciation: [ɡijom apɔliˈnɛʁ]; Rome, 26 August 1880–9 November 1918, Paris) was a French poet,playwright, and art critic born in Italy to a Polish mother.
Among the foremost poets of the early 20th century, he is credited with coining the word Surrealism and writing one of the earliest works described as surrealist, the play The Breasts of Tiresias (1917, used as the basis for a 1947 opera). Two years after being wounded in World War I, he died in the Spanish flu pandemic of 1918 at age 38. 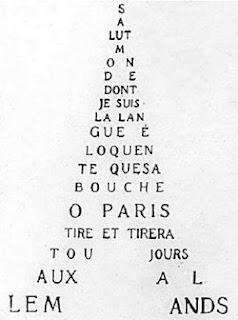 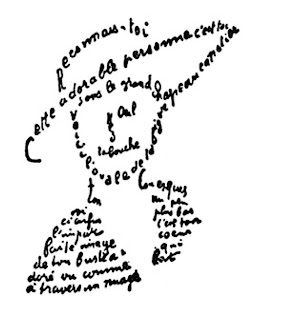 Shortly after his death, Calligrammes, a collection of his concrete poetry (poetry in which typography and layout adds to the overall effect), and more orthodox, though still modernist poems informed by Apollinaire's experiences in the First World War and in which he often used the technique of automatic writing, was published.
Posted by john yates at 01:44

john yates
I am a graphic design student based in sheffield and i have set up this blog as part of my research for my second year projects. I will be using this blog to post examples of research and experiments i have done and my opinions on them and also to get other peoples opinions about the work i have found and things i have done.